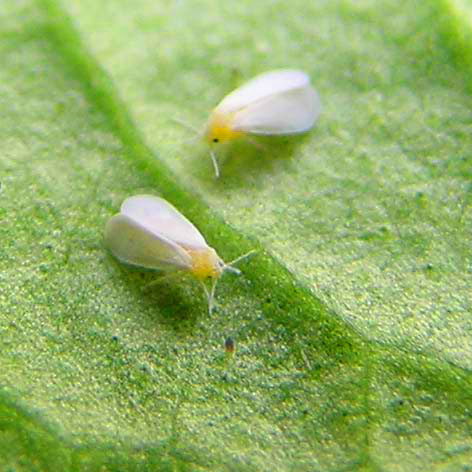 In the last few posts, we’ve been all about the Good; but this post is about the Bad and the Ugly! What’s that, you ask. WHITEFLIES!

Don’t let their White Wings fool you. These pests are far from angelic. In fact, today I’ve decided they are pure evil; and they’re sugar addicts to boot.

WhiteFlies are not really flies at all as they are related to the aphid family. There’s a species that’s called Greenhouse WhiteFly (GHWH) and their favorite plant is eggplant. But in our Greenhouse they have decided our Basil is their plant of choice. They are also attacking our Okra and even our lettuce.

This is Grow Bed #5 where a lot of sweet Basil is growing. That’s where the major infestation is occurring.

We totally blew it in relation to this infestation because we were going out to the Greenhouse at night when it was cooler. The WhiteFlies were tucked away in their resting mode under the plant leaves and we missed them until they became a full-blown invasion of our beautiful Greenhouse. From our perspective, we had none and a week later we had thousands. UGH! 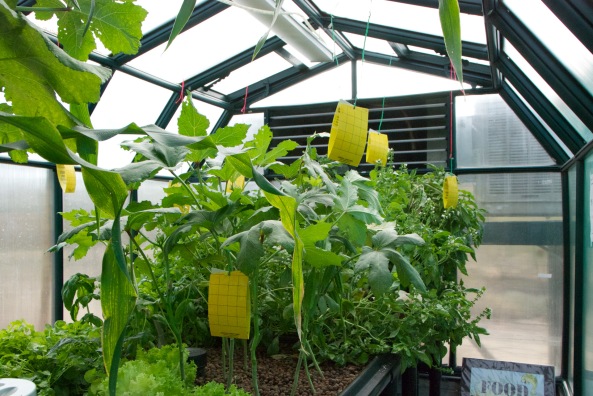 You can’t tell from these pictures but the Basil and small Okra leaves are full of Sticky Gooey WhiteFly excrement.

When we thought we had none, they were going through the mere 18 days of development time necessary at 86 degrees.

Here’s what Wikipedia has to say about this scourge on Greenhouses: “Developmental time (egg to adult) for the GHWF can take from 123 days at 54° F. to only 18 days at 86° F. GHWF eggs hatch and go through several instars (stages of larval growth) while attached to the undersides of leaves. Shortly after hatching, the GHWF larvae attaches into the leaf tissue and begins feeding on plant fluids. It remains attached until it emerges as an adult. While attached, the larvae is covered with a protective skeleton that makes it difficult to kill with insecticides. Adults can begin laying 4-10 eggs per day within 1-2 days after emergence. As the various stages of the GHWF feeds on the plant, it excretes large amounts of honeydew. A black sooty mold can grow on the honeydew that can interfere with leaf photosynthesis and transpiration.”

We’ve pretty much lost our Basil in the back Grow Bed. It’s all sticky with the sugary excrement  of the WhiteFlies. Good bye Pesto and delicious herbal spice. It’s really amazing how quickly what appears as a few WhiteFlies turns into an endless army of these invaders. 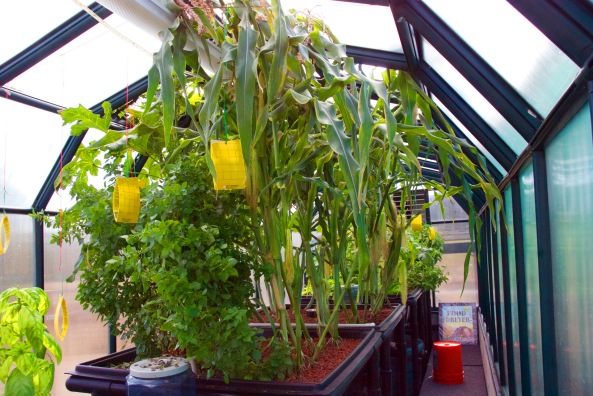 Thank goodness they don’t seem to be interested in the Corn because it’s not mature yet. But they love the Greek Basil.

Take it from us who are learning the hard way, everyone with a Greenhouse Aquaponics system should be putting up Sticky WhiteFly Traps (especially in warm weather) for monitoring WhiteFly adults as soon as a crop is seeded. We sell them on our website Accessories page. Each adult White Fly caught on a trap may prevent 100 eggs from being laid on your plant.  And believe me when I tell you to wear a face mask if you put up traps after the infestation and then deliberately shake the plants where the WhiteFlies are residing. I didn’t and I’m going to drink a nice big glass full of GSE (Grapefruit Seed Extract) as soon as I finish this post. Somehow, writing this post has turned into my revenge on WhiteFlies. 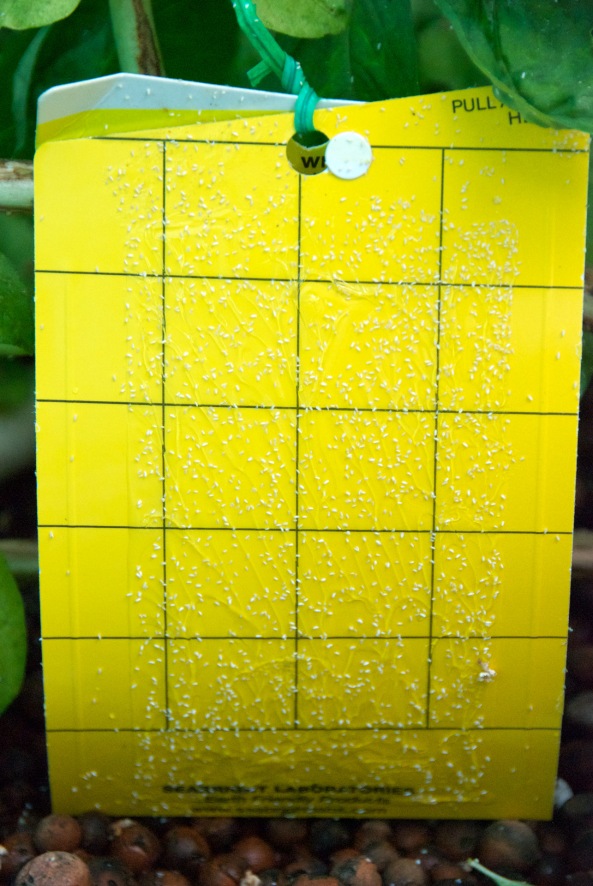 This is also REVENGE!

But the Sticky WhiteFly Traps are only the beginning of our counter attack. Because in a couple of days we’ll be receiving our Encarsia formosa (WhiteFly Parasites). We’re getting the Nile Delta WhiteFly Parasite because it will go after all major types of WhiteFly including Greenhouse, Silverleaf, Sweetpotato and Banded Wing. These Nile Delta guys are actually wasps. You can get them at Hydro-Gardens. 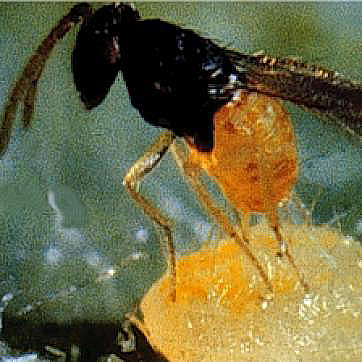 WASPS! EGAD! That’s fighting with some real big guns. We’re hoping they’re going to be so full of WhiteFlies, they won’t bother with us. Actually, the instructions regarding how to release them say they will only go after WhiteFlies and not plants or people. That’s good news. Here’s how they operate on the battle field.

Below is a photo of a plant leave invested with WhiteFlies. 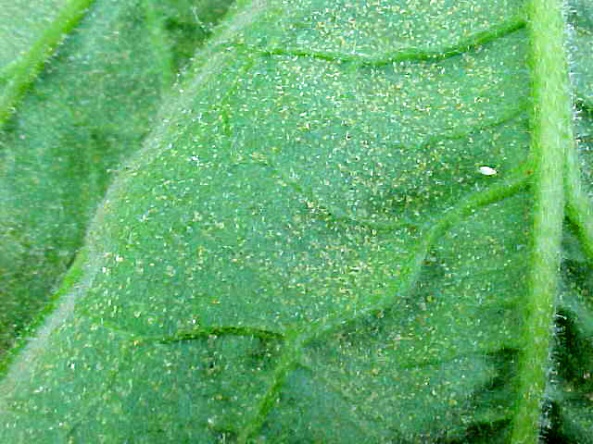 What these WhiteFly Parasites do is actually lay their eggs into WhiteFly larvae. No wonder they are called parasites. WOW! That’s infiltration of the enemy lines at the deepest level. Once that happens the leaves look like the pictures below depending on which kind of WhiteFly is in your Greenhouse. The instructions do say these guys do a better job if you employ them early in the fray. We hope we’re getting a real serious Black Water bunch that can eradicate the infestation after being hired late in the insurrection.

If things go as planed, the back of the leaves where the larvae is turn into this: 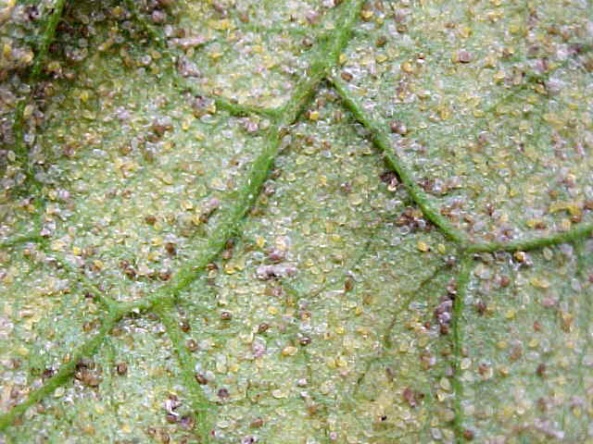 The photo above is of a leaf that was invested with a species of  WhiteFly called Silverleaf after the Nile Delta Parasite laid its eggs inside the WhiteFly larvae. This is good news. 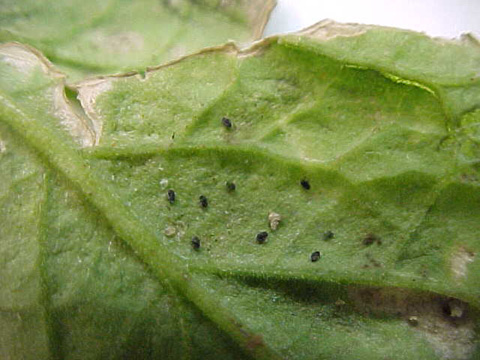 Here is a leaf that was invested with Greenhouse WhiteFly after the Nile Delta parasite laid its eggs inside the WhiteFly larvae.  Again, this is the good news.

We’ll keep you posted on the process of eradicating WhiteFlies as it progresses. In the meantime, I feel a whole lot better after hitting the Publish button because I have just aided in the eradication of WhiteFlies all over the world.

We really consider ourselves to be peace loving people. We even take most bugs we find in our desert home outside rather than killing them (except black widows). But those WhiteFlies have turned me into a Warrioress who is defending her Greenhouse and her food.

Thanks for being there. Now for that big glass of GSE!

2 comments on “The Good, the Bad and the Ugly!”