This post is all about packing and traveling about five hours with Live Fish. We were heading for the Self Reliance EXPO in Mesa, AZ and were crossing the state line into Arizona so we didn’t take the veggies and had to purchase and plant veggies once we got to Arizona. In a way, this is a tutorial about how to travel with Live Fish. We learned a lot in our first Fish & Veggie Road Show to the KNOWPHEST in Los Angeles as we lost a couple of fish. This time all of our fish arrived safe and sound. Here’s what we did differently.

The first thing we did was we stopped feeding our fish a couple of days prior to transporting them. Unlike mammals, fish can easily handle not eating for a couple of days. The reason that’s important is that with empty stomachs, they won’t pollute their traveling water with their own waste and tox themselves out. Once they are at the Show, their waste will be converted to nitrates by the friendly bacteria in the biofilter that is the Grow Bed with plants in it.

The next thing we did differently is we took two traveling tanks instead of one. In our first Fish & Veggie Show, we put the big fish in with the fingerlings and two of the fingerlings didn’t make the trip. We don’t know what happened; but figured the safer way to protect the little ones was to not mix them together in one tank.

The second picture shows the heater and the box it comes in.

This is a really great little electric water heater that really does the job. We sell two of them, one is a 200 Watt Heater and the other is a 300 Watt Heater. They are both on our website Here. At the Show, the 300 Watt  Heater kept our 120 gallon fish tank at a cozy 76 degrees for our fish. The third picture shows the temperature rising as the Titanium Heaters heat up the water prior to our putting the fish in their traveling tanks.

Of course we also had aeration using our favorite 4″ Aerators that you can also find on our Accessories Page and using our Air Pumps that you can find on our Pumps Page.  Fish can’t survive without it. We bought inverters and had a backup battery pack that ran the heaters and the air pumps during the times that we stopped on the road to eat and take bathroom breaks. The photos above show the two air pumps sitting in front of the traveling fish tanks.

The important thing that makes these traveling tanks is they have lids on them. The lids are important to keep the water in the tanks and not on the bed of the Honda Pilot. However, driving behavior must be adjusted to keep the water in the traveling tanks even when they have lids. We ended up having to turn around and go home to get yet another back up inverter when we first took off at 4 AM and sloshed a lot of water into the bed of the Honda killing our original inverter. Traveling with fish is, indeed, tricky.

The final new thing we did to make traveling safer and more comfortable for the fish was we covered the traveling tanks with a blanket while the heaters went to work heating their water. Then we slept for a few hours before hitting the road.

The total amount of time that the fish were in their traveling tanks was about 24 hours, which was a long time; but they did fine due to all of the extra precautions we took this time.

We were able to reduce the number of cars it took to carry everything needed for our Show down to two cars because we added a trailer, which the truck towed. Here’s the cartoon image of our Fish & Veggie Road Show followed by an actual picture of our Tacoma with its trailer. 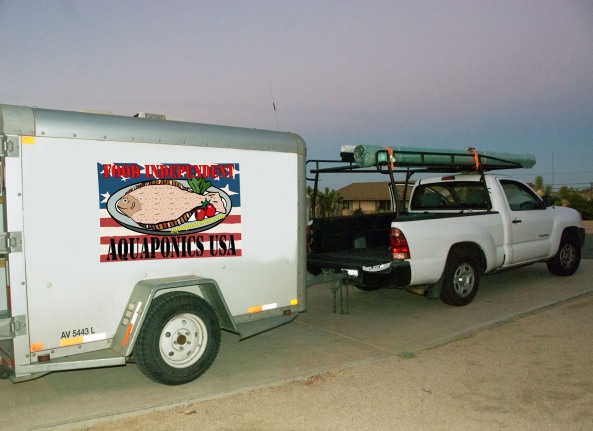 Here’s a picture of what was packed in front of the traveling tanks in the very convenient bed of the Honda Pilot. 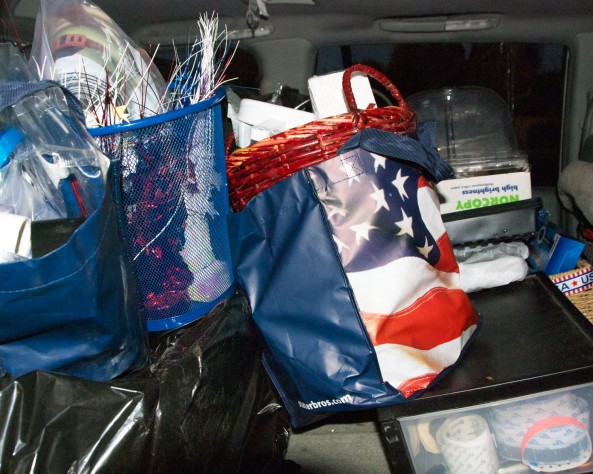 We definitely jam packed both vehicles and the trailer.

But once again, the result was impressive.

Watch for our next post which will be all about what happened once we got to the Self Reliance EXPO. It was such a scene. We so appreciate being able to take you on the  ride with us as we share how important Aquaponics is in this challenging 21st Century. See you again, soon.

2 comments on “Packing for and Traveling to our 2nd Fish and Veggie Road Show in Mesa, Arizona!”